I’ve pulled out, scanned and uploaded all the material I’ve ever published on ‘Adverse Mechanical Tension’ (AMT) of the nervous system.  AMT became Adverse Neural Tension for a while before settling to ‘Neurodynamics’ – a term that I think Adelaide Physiotherapist  Michael Shacklock introduced and it stuck.  I always want to raise the flag for good old Bob Elvey here a bit…he died recently and he was one of the early pioneers of nerve movement and it’s examination, along with Geoff Maitland on the slump test….via good old fashioned clinical observation.  If you get a chance Geoff’s old article is well worth a read…. here’s the link (thanks to Blaise for finding this!)…

(Tip…. I found it incredibly slow to come up on my computer screen from the AJP site, best to click on the download button and then view from there… works immediately! Louis)

AMT was the term coined by Alf Breig from his book – Brieg, A 1978 Adverse Mechanical Tension of the Nervous System, Almqvist and Wiksell, Stockholm.

It was where a great many of the slides showing nerve movement were lifted from in Dave Butler and my lectures and Dave’s writings, and many others since I’m sure.   I may be wrong but if I remember rightly, I think it was the clear demonstration of nerve movement in Briegs’ illustrations that Dave found so inspiring when he did his Slump research project on the Adelaide Manipulative Therapy course in 1985. During Dave’s literature search he came across Brieg’s book and saw the pictures.  His project was on slumping in the elderly..and he used some of the oldies from the RVS (Royal Voluntary Service) tea shop in the Royal Adelaide Hospital!   After regularly patronising the shop, chatting them all up a bit, buying loads of cups of tea and a great many of their famous ‘rock-buns’ he got them to agree to being slump tested!

Below are two of Breig’s famous pictures illustrating nerve movment during ‘cadaver’ straight leg raise!!  The position of the cadaver is shown in the bottom left of the picture.  It’s a view from anteriorly of two nerve roots emerging from the low/lumbar/ sacral? spine.  Tags have been placed on the roots.  The roots emerge and join becoming the lumbo-sacral plexus. The lower picture shows the cadaver in full SLR and you can clearly see the movement of the tags and the general increased tension of the nerves there, including the sympathetic chain if you look closely. 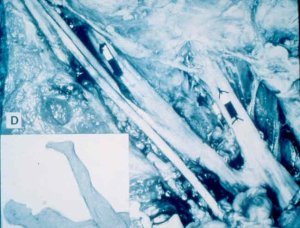 There you go. Pictures that have been round the world a great many times and inspired many a physio to caress, yank and twang pain patients’ nerves and earn money!

My clinical observations of ‘nerve root’ problems didn’t seem to always go with the flow of ‘Neurodynamics’ – or what I  call nerve ‘pulling’ or tensioning…. I kept seeing patients with nerve root pain who were flexed of deviated away from the painful side and who when they were brought up to neutral or extended the root pain got a whole lot worse… Some of the elderly with sciatica or brachialgia had full comfortable flexion often able to touch their toes, younger ones too occasionally, extension was invariably a key provoking movement.  It was obvious – nerve pinch… and something the ‘nerve-pulling’ fad seemed to have passed by, maybe it still does??

So, in the Neurodynamics chapter in Judith Pitt-Brooke et al’s book I lent 6 pages to ‘nerve compression’ dynamics, theory and reasoning.  Take a look… I hope the drawings there make sense… I highlighted this further in the cervical nerve root articles, – the OCPPP/In Touch one being the more comprehensive and the Manual Therapy one being the more recent.

Normal extension of normal spines tends to put pressure, even squash nerve roots and their vasculature. Remember, a nerve root in the intervertebral foramen or in the lumbar radicular canal is surrounded by vasculature and adipose tissue… Anything that tends to make the space smaller will compress the adipose tissue and therefore compress the nerves indirectly.    Add a bit of degenerative change, loss of disc height, disc bulge, disc protrusion/extrusion, osteophyte, enlarged facet, thickened flaval ligament…(ie. normal ageing!!)  to the ‘space’ there, and the potential for more marked root compression increases even further.  It happens to all of us as we age and for my logic, is a significant factor in explaining why the human spine tends to flex at the low lumbar/low cervical zones as it moves on in time… A bit of low lumbar or cervical flexion gives those important nerves of arm/hand and leg locomotion and co-ordiination, a bit more room!! Have you ever seen an 70 plus year old with a nice lumbar lordosis…??  Pretty rare!  Check out figure 4.12 in the Neurodynamics chapter, that shows how the superior facet comes together in opposition to the backward bulging disc during extension of a degenerate spine.  Lance Penning called it a ‘pincer’ movement and cadaver evidence from degenerative lumbar spines can often show actual indents in the roots from the facet and disc pinch! Roots are not uncommonly found to be flattened too.   It may not necessarily be painful, but it makes sense of why the elderly often have hard to get calf/triceps reflexes….

I hope you have a read of the chapter and articles, and think a bit more about nerve compression/pinch too….if you have already, fine, it’s merely my spin on it!

Ah, finally, those two early neural tension articles posted are of historical  interest more than anything.  You can see ‘where we were’ in 1989 and then later in the 1993 Olive Sands lecture arcticle,  that I was just starting to have a prod from the pain mechanism perspective… looking back it was really quite crude, but it was a great time!

Best wishes, and thanks for all your support.

7 thoughts on “Neurodynamics, a bit of history!”